Movies You Should See – Pay It Forward

If you are someone in Recovery from any kind of addiction or you are in a position that allows you to help people in recovery from addiction then this movie is MUST SEE!

Based on Catherine Ryan Hyde ‘s book  with the same title this movie is a powerful drama with a great message and wonderful acting . It was released in 2000 and stars Helen Hunt (looks great in this movie), Kevin Spacey, and Haley Joel Osment as Trevor.

A young boy stumbles upon a simple way to change the world in this drama. Trevor (Haley Joel Osment) is a bright 11-year-old boy who comes from a troubled home; his mother Arlene (Helen Hunt) is an alcoholic trying to hold down two jobs to support her son, while Trevor’s father Jon Bon Jovi) left his family behind some time ago. At school, Trevor’s class is introduced to their new social studies teacher, Mr. Simonet (Kevin Spacey), a guarded man with severe facial scars. Simonet gives his class an unusual assignment — think up a practical way to make the world a better place, and put it into action

Posted in Movies, Movies you Should See

Comments Off on Movies You Should See – Pay It Forward

So after reading a post on Harsh Reality from OM it got me thinking about Alcoholics Anonymous, 12 step programs and people having or not having success in dealing with addiction problems. People in the 12 step programs who have long term sobriety will often state that the success rate in the fellowship is 100% if you do what is suggested , now anyone who has actually attended meetings know that this is not true. I’m not sure what the real numbers are or the stats when talking about 12 step programs and their ability to keep people sober, but I have often asked myself and wondered what other people think about the idea of their being alternative ways to really fight addiction with long term success? Is there another way that really works?

Before I continue this posting, you should know this. If you don’t have an addiction problem or have never been truly addicted to anything , I DON’T CARE about your opinion on this matter. Now that said I have dealt with addiction in many forms and have attended meetings on and off since the age of 18 , and now being 43 y.o I can certainly say that I have  personally seen people have great success following this 12 step model of recovery. I have also seen people that have had success and turned their life around not following this model, but the latter are few and far between and doesn’t mean that they don’t exist. I have not had much success when not following the 12 step model of recovery, but there was a time in my life not too long ago when I found a hobby and passion that I truly loved. That passion was motocross and working on motorcycles. Riding with my son and my best friend on a Sunday morning and as many days a week as I could really became a much needed factor in enjoying life and relieving stress.

Many people that I have seen outside 12 step fellowships that try to beat addiction often turn to health and exercise as a means to help with the everyday battle of fighting an addiction problem. Some people turn to church and “GOD” if you will and use religion as a ways and means to battle this problem. More often that not people that subscribe to the whole religion thing and don’t find other things to fill their life with fail miserably. I can’t tell you how many times I have seen that subscription cancelled. The religious method is very often cultural in many ways. African Americans and sometimes people of Latin decent often try it this way,but  a lot of people that went to church in their youth tend to try and fall back to this as a means to deal with addiction. I do think that having a support group is really important because when dealing with an issue like this you have to able to talk to people that have been there.I can’t think of another sickness where having someone to talk to that has been there is as imperative as with addiction.  Also breaking habits that you have built over the years of using / drinking is mandatory, so what do you now do with the time you have that used to be spent getting your alcohol or drugs? How do you now deal with the everyday stress in your life?  When active in addiction all these things are dealt with by picking up. One of the little tricks I used to use when I had really tough cravings to drink is running and getting myself an ice cream sundae or ice cream cone of some kind, and more often than not, making sure it had chocolate in that equation. There all kinds of studies out there where chocolate touches some of the same receptors in the brain as opiates.

The bottom line question here is , Is there another formula for success out there other than 12 step programs and going back to church that have really worked? I think that finding a passion really helps. Exercise and meditation can’t possibly hurt your chances and finding alternative ways to deal with stress are all must have’s as far as I’m concerned. That whole Idea of (I’m sure you’ve seen the commercial) “I was an addict for 10 years, NOW I’M NOT” is such BULLSHIT . I can’t even get started on that brainwashing. I truly believe once you are an addict, if you aren’t careful you can always fall back into active addiction. So what is the formula you have seen work? can the 90 days really break any bad habit by doing something else?

Addiction – I was never on Breaking Bad

Comments Off on Addiction – I was never on Breaking Bad

With the New School year coming up and fall weather not far around the corner, Now’s the time to stock up on some really great T-shirts and Sweatshirts!…..Check out all our Motocross Designs as well as the many Different Sections and products we offer at our shop OurShirtsRock.com.

Comments Off on New Motocross T-shirt Designs from OurShirtsRock.com

Below are just some of the Classic Recovery designs we offer at OurShirtsRock.com

WWW.OURSHIRTSROCK.COM – For all your recovery gifts and merchandise. 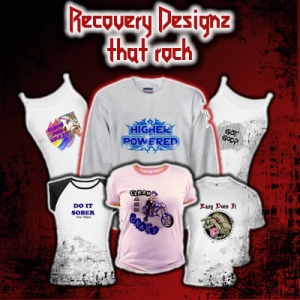 Comments Off on Recovery Classics : OurShirtsRock.com

On June 10—the 78th Anniversary of Alcoholics Anonymous—Page124 Productions Will Screen Nationwide the Acclaimed Documentary about the Founder of A.A., “Bill W.”

On June 10—the 78th Anniversary of Alcoholics Anonymous—Page124 Productions Will Screen Nationwide the Acclaimed Documentary about the Founder of A.A., “Bill W.”.

Comments Off on On June 10—the 78th Anniversary of Alcoholics Anonymous—Page124 Productions Will Screen Nationwide the Acclaimed Documentary about the Founder of A.A., “Bill W.”

At OurShirtsRock.com we sell all kinds of Recovery T-shirts and Merchandise, If you or someone you know is in recovery from any kind of addiction, Check out our site for the latest t-shirts and products related to recovery!

Whether you know who they were or not, or even liked them, They made a huge impact in hip hop and paved the way for So So Def artists and Label. Jump and a few others were really Dope records at the time!