Hungry?…recipes…good places to eat, you get the idea

First off why is TACO BELL deciding they want to take on McDonalds? Just because they have some breakfast sandwich wrappie thingy now all of the sudden they want to go after the BIG BOY? LETS just forget the fact for a second that Mcdonalds had the Egg McMUFFIN or the BIG BREAKFAST or the best hash browns and pancakes this side of the Mississippi or that side for that matter.  Taco Bell suddenly decided OK we have a couple breakfast things and now they go After RONALD MCDONALD? What IDIOT over at Taco Bell thought that this was a great idea for a marketing campaign?   They should have stuck with their Dog commercials and they wouldn’t be in this mess to begin with. Now they want to go after McDonald’s Mascot the clown Ronald Mcdonald? LOOK TACO BELL its not that Mcdonalds has Ronald McDonald (AND don’t get it twisted Ronald has done a TON OF CHARITY work), ITS BECAUSE THEY have what no one else has. and that’s the HAMBURGLAR!!!!! and a Kick ass breakfast that ends too early!!!!! IDIOTS! 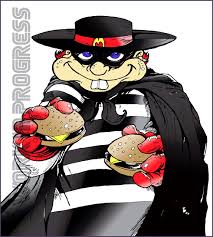 I personally couldn’t believe when Hostess went out of business, I mean having no twinkies on the shelf is just UN-AMERICAN!….So when I went to the grocery store yesterday I bought a Box  =)

Glad to see they are back! I hope they survive!

Comments Off on Twinkies: Now For Bros and Suddenly Everywhere | TIME.com

Meditations on Philosophy, Strategy, and Life